Sure, I have heard of Gua Kelam the name - but never been here myself until recently.  I ended up wishing I knew of it much much earlier. This is a beautiful park - it has 2 cave systems and the park at the OTHER end of the caves is a park worthy of your time and visit : you will be amazed that this is in Malaysia but not much is publicised about it.

Cave system 1# is now closed - a tram used to run and enables the visitor to punch out on the other side of the limestone hill. The tram is now broken down and some millions obviously wasted. So we're left with cave system 2# which is an elevated gangway that cuts through the hill whilst being suspended above the underground river. All lighted up with railings so it is safe for little children as well - this facility and the park spaces will cost you a princely sum of RM1.00 (2014) only. It is a short walk through the cave which opens up to this : 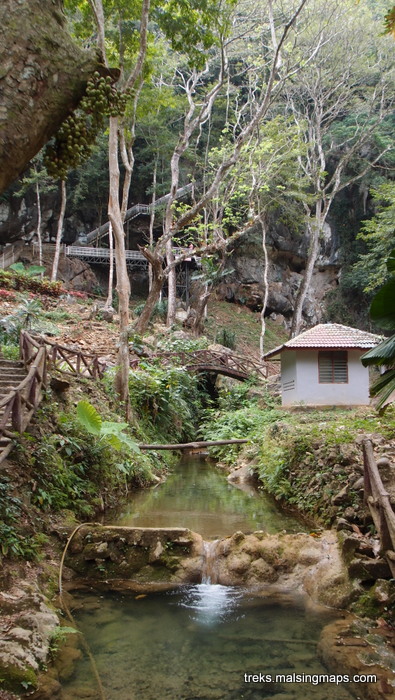 Pack lunch, a hammock with an afternoon to spare - and you're all set. There are toilets and changing facilities should you decide to swim in one of the creek network. There's a deer farm and the mystical Sintok Tree (Pokok Ajaib Sintok). At last count (we literally lost count), this single tree has it roots creeping up to more than 32 other adjacent trees! You could say it is a spineless tree. Indeed.


DISCLAIMER - please DO NOT do the following:

Fully equipped with proper gear, supplies and torches - we sought out the second cave system. It was not difficult to find and the egress was located somewhere higher up against the limestone hill wall. Inside - there is absolutely zero light so reliance is solely on your (hopefully very reliable) torchlights. What's inside is a network of caves - complete with concrete paths, steps, rest areas, railings, multiple junctions and lightings which leads you to the end of the line of the tram. Of course none of the lights work now. As we moved further into the cave, it got warmer and before long we were sweating buckets. The trek ends where the tram rail meets. We were tempted to trek out along the tram rail but decided to backtrack to avoid tangling with the Park Rangers.

If you're in Perlis - don't brush off a visit to Gua Kelam : you must go!!

Is it far? In Perlis, everywhere is just "15 mins away". So wherever you are in Perlis, it will take you no longer than 15 minutes to get to Gua Kelam. Really!

History has it that Gua Kelam was previously used a rice trail or a smuggler's run where supplies made its way to and from across the Siamese border.